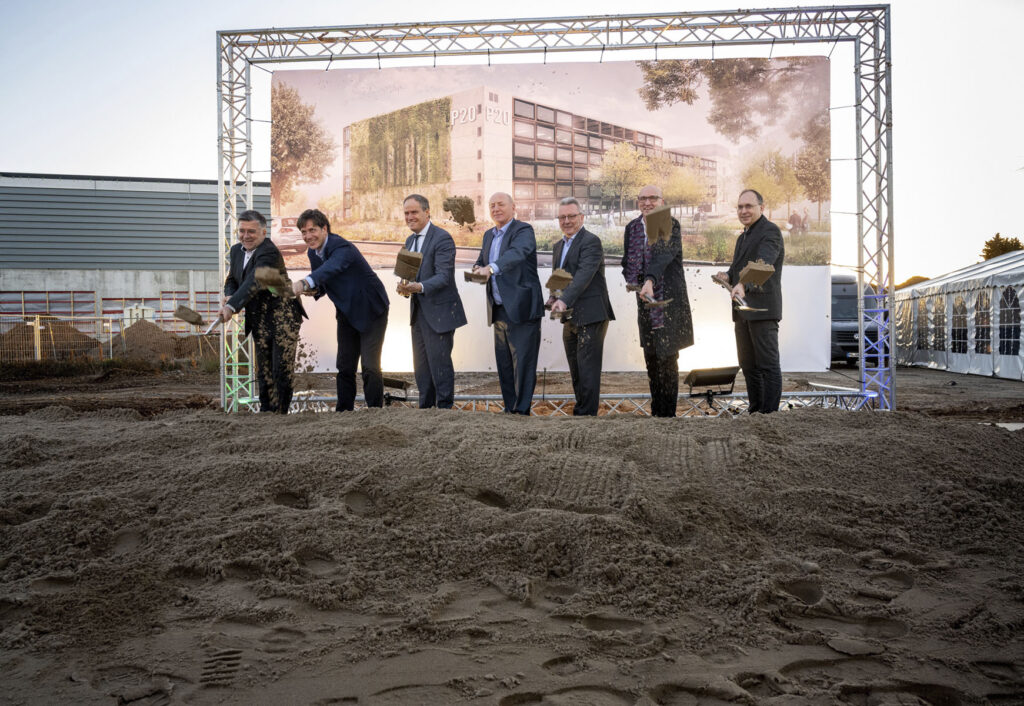 “This is not just any parking garage”

Groundbreaking ceremony: the garage next to the large sports hall on the Innovation Park will have space for 672 cars

Heidelberg. The multi-story car park which will be built on the Heidelberg Innovation Park (hip) on Speyerer Straße will be an attractive feature for large-scale events that will take place in the nearby sports hall in the future. It is also an important part of the hip, since it will offer central parking facilities for the new commercial quarter, not only for 672 cars, but also for 750 bicycles. Yesterday, the groundbreaking ceremony marked the go-ahead for the Stadtwerke Heidelberg Garagen GmbH project on the site of the former Patton Barracks.

However, the new car park is much more than just a parking garage: the tower on the east side of the building is packed with state-of-the-art technology. “This is not just any car park, the things that belong together are brought together here”, explained the head of the city’s construction department, Jürgen Odszuck. The entire district will be supplied efficiently from here. For example, a cooling system is housed in the tower. “This system will use waste heat to cool the large sports hall and the western section of the hip”, reports Michael Jäger, Managing Director of Stadtwerke Heidelberg Garagen. This is an ecological game changer.

The cooling systems are driven by the waste heat from two combined heat and power units, which are also located in the tower. “Under the parking garage there are two round tanks, each with a capacity of 250 cubic meters, which are filled with water and special pads”, reports architect Uwe Bellm from the AP88 office. Excess energy from the exhaust air or the photovoltaic system consisting of 1700 modules –which also serve as a roof— is used to freeze the tanks. Whenever the hall or the neighboring companies need to be cooled, the ice can be melted again.

The 20 charging stations for electric cars will also run on electricity from the photovoltaic system. If necessary, the capacity can be expanded to 120 charging stations. “This is a well-rounded concept, a great joint project and we are looking forward to a modern multi-story car park”, said Mayor Eckart Würzner yesterday, adding that it is an example of sustainable urban planning and environmentally conscious mobility. The car park and its technical functionality were developed in cooperation with Stadtwerke Heidelberg Garagen and Stadtwerke Heidelberg Umwelt.

“We will have a very attractive building thanks to the carefully designed facade”, emphasized Odszuck. The facade on Speyerer Straße will have a vertical garden. “The green front is not just a decoration; it also serves as a fine dust filter. In this respect, this building is indeed a multi-tasker”, said the head of construction. The 500 square meter green facade will not only filter 300 kilograms of fine dust from the air and absorb 1.6 tons of CO2 per year, it will also become a home for bees and bats.

Stadtwerke Heidelberg Garagen also wants to offer its customers high-tech features: in addition to cashless payment, the parking garage will also be equipped with license plate recognition. “If you have registered in the corresponding app, the barrier opens automatically when you drive in”, reports Patrick Jelinek. The payment details are stored in the app so that the barrier opens automatically when you drive out and the amount is billed accordingly. “You will not need a ticket anymore”, says Jelinek. This system could reduce the lines at the parking ticket payment machines, especially during events in the large sports hall.

The garage is scheduled to open in the second quarter of 2021. The large sports hall is to be completed this spring, after which the equipment and trial operation will follow. The interior work is currently underway: the building services are being installed and the preparatory work for laying the hall floor is in progress. As soon as the weather permits, the facade elements will also be installed.