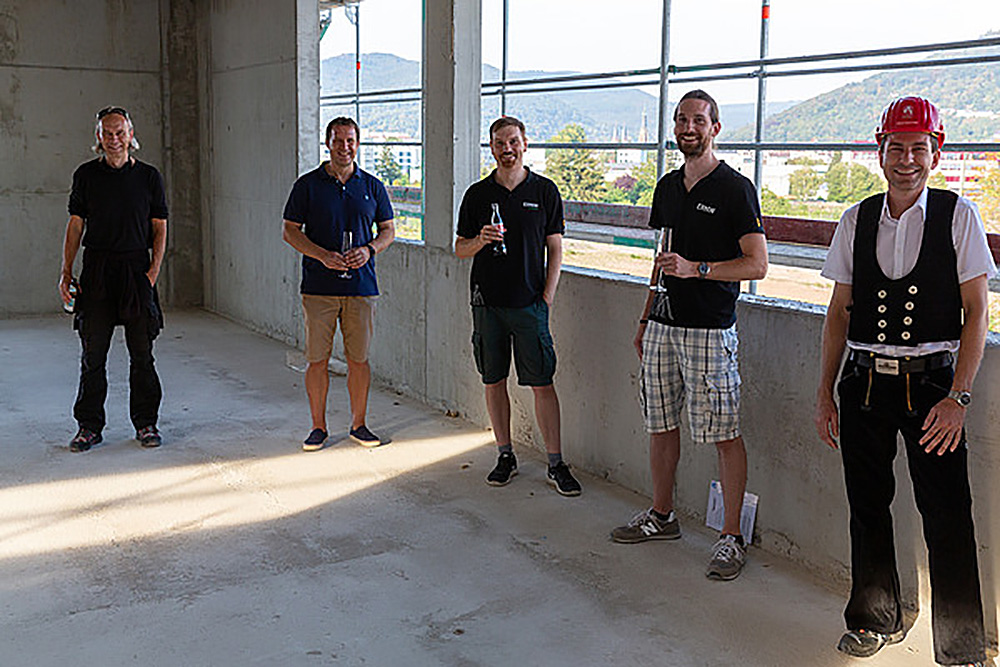 The employees and the managing directors Michael Schaefer and Florian Grunow inspected the finished bare brickwork on Wednesday, September 16. Once the building is completed, around the turn of the year 2021/2022, it will offer space for over 150 employees distributed on four floors and around 3,100 square meters. There will be an underground car park in the basement. ERNW is the first private company to construct a new building at hip.

ERNW was founded in Heidelberg in 2001 and offers its customers a wide range of services in the field of IT security. The company centers its activities on manufacturer-independent advice and testing. It previously had its headquarters in the Weststadt/Südstadt industrial park, not far from its future home at hip.

Hip is going to be a hub for ideas around the digital future. It is developing on the premises of the former Patton Barracks on Speyerer Straße in Kirchheim and offers companies of all sizes from the IT, digital media and life sciences sectors a space to call home. Much of the park should be ready by 2023. The demolition of old buildings has now been completed, in the west area the entire infrastructure and road construction are as good as completed, the east part will follow in 2021.

All existing buildings that will be preserved, will be rented or sold. The company AMERIA, the city’s digital agency, the digital hub kurpfalz@bw and the city’s digital office have already moved in. The German-American Institute has started to renovate its “Begeisterhaus” (house of fascination) and investor Dr. Friedrich Hoepfner is building the iWerkx, a new center for young companies in the technology sector. The Business Development Center, a project of the Heidelberg Technology Park, is already in operation. At the end of 2020, the large new sports hall for up to 5,000 spectators will also be ready.